free shipping on orders over $99

Whether you are scouring the country for rare motorcycles, or you just want to know some basic information about a bike you saw in a parking lot, understanding how Harley-Davidson formats their vehicle identification numbers (commonly referred to as VIN numbers) will give you the 411 on exactly what type of Harley you are looking at. From the very beginning, Harley has been stamping their engines with unique serial numbers, but these early serial numbers didn’t conform to any real standard until the 1920’s. At that point Harley began using an easily decipherable string of numbers and letters that saw continued use until 1969. For the 1970 model year, Harley revamped their VIN numbers and for a brief ten-year period used this different arrangement. The last change came in 1981, when the National Highway Traffic Safety Administration mandated that all vehicle manufacturers adopt a 17-digit VIN and Harley switched to this new standard which they still use today.

Locating the VIN on a Harley-Davidson Motorcycle

Before we get into the details of how to decode these VIN numbers, let’s start out with where to find them. If you are looking at a 1969 or older machine, the VIN number is only going to be located on the motor. It will be hand stamped on the left side motor case, just under the cylinders on a raised boss. It is important to note that the VIN number was not stamped on the frame on these early models and that any numbers found on the frame are casting numbers that were identical on every frame of the same model/year. Starting in 1970, The official VIN location moved to the frame neck, and it has remained in that location ever since. From 1970 - 1980, Harley continued to stamp a matching VIN on the motor (except for early 1979 models), so that the motor could be matched to the frame. In 1981, when Harley switched to the new 17-digit VIN standard, they stopped stamping a matching VIN on the motor and began using a truncated version of the VIN on the motor which still allowed for matching the motor to the frame but only used 10-digits.

Harley-Davidson VIN Numbers Prior to 1970

Jumping back to the 1920’s we see Harley standardizing on a very straightforward format for their VIN numbers. Through 1969, Harley VIN numbers consisted of a combination 8 to 11 numbers and letters with the following arrangement: 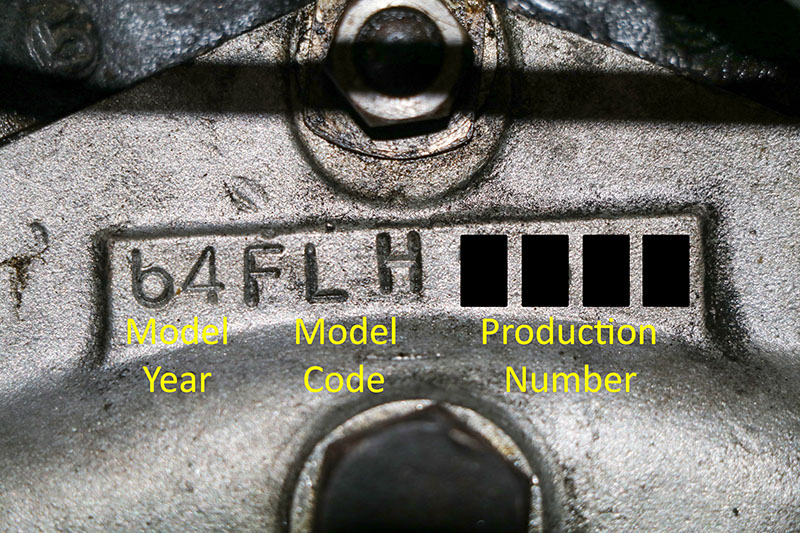 Further breaking down the VIN number, we find that the bulk of the information about an individual motorcycle is contained within the letters following the production date. The first letter, often referred to as the engine code, designates the type of motor originally installed at the factory. Below is a list of Engine Codes for Harley V-twin motors built by Harley from 1920 until 1969. Note that prior to 1935, Harley also produced a variety of single cylinder models under engine codes A, B and C as well as two horizontally opposed two-cylinder motors under engine codes WJ and WF. There was also one other horizontally opposed two-cylinder motor built in 1942 and was designated by the letters XA.

Any letters after the engine code tell more specifics about the motor. These can indicate a special model (like A for Army or R for factory racer), but usually tells something about the engine’s performance in comparison to the base motor. For example, a standard U series motor is 74” with medium compression heads. Based off that motor, Harley built three slightly different versions which are designated the UH, the UL and the ULH. The UH is simply a larger displacement version of the base motor, bumping the cubic inches up to 80” and keeping the medium compression heads. The UL featured the same displacement as the base motor but is outfitted with high compression heads. Lastly the ULH is a combination of the UL and UH motor featuring both 80” and high compression heads. Unfortunately, Harley kept changing the meanings of these letters slightly over the years to fit with their current model lineup. So, if we look at the model designations for early panheads we will find that there is indeed a medium compression 74” base motor designated with the letter F and there is also an FL model which is a 74” motor with higher compression. What we don’t see is a medium compression 80” FH or a high compression 80” FLH. Instead, there is a 74” FLH which is a higher compression version of the FL motor. The table below shows some of the commonly used letters between 1920 and 1969 along with their possible designations.

For any model year prior to 1970, if you look up the actual production numbers from Harley, you will see that there are a lot of models listed which use letters that are not included in the above table. The reason being is that Harley did not include these letters in the VIN numbers. While Harley may have produced and FLHF and an FLF in 1957 for example, these bikes would have been stamped FLH and FL respectively with the F (which stands for footshift) omitted. Other examples of omitted letters are S for sidecar and B for electric start.

In 1970 Harley decided to change the VIN number to a 9-digit combination of letters and numbers with the following arrangement:

As previously mentioned, 1970 also marked the first year that the official VIN location was moved to the frame neck although a matching VIN number was still stamped on the motor. For the first month of 1979, Harley decided to put unique non-matching VIN numbers on frame neck and motor, but due to complaints from the police (all the bikes looked stolen) this practice only lasted for production numbers 43000H9 - 48199H9.

Starting in 1981, Harley implemented a new 17-digit VIN number format that was mandated by the National Highway Traffic Safety Administration. The full code was stamped on the frame neck with a shortened 10-digit version stamped on the engine. The 17-digit VIN uses the following arrangement: 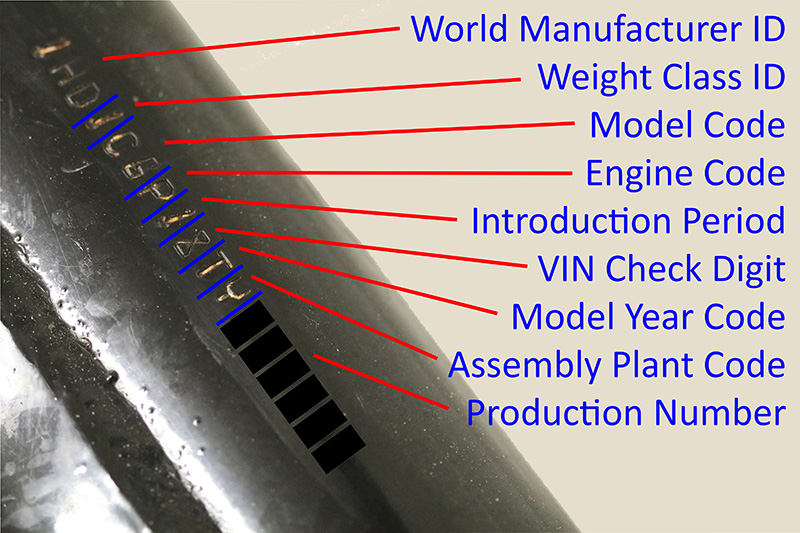 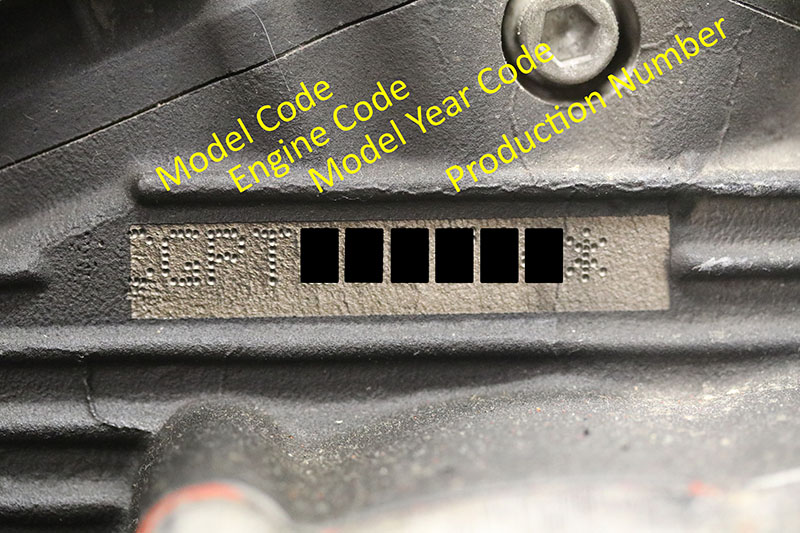 17-digits contains a lot of information, but using the tables below, you can work out all the details of any Harley-Davidson motorcycle built from 1981 until present day.

In between the Introduction Period Code and the Model Year Code there is a single digit check number used to detect invalid VINs. The number that appears varies and is based on a mathematical formula that the U.S. Department of Transportation developed.

Finally, you are left with 6-digits that indicate the production number of the motorcycle.

It’s amazing to think that in over 100 years of operation, Harley-Davidson has only used three VIN number standards. That certainly makes deciphering VIN numbers a lot easier and with this article as a quick reference you should be able to figure out some basic information on just about any Harley-Davidson model you come across. Keep in mind that even though this article is extensive, Harley has made a number of prototypes and one-off models over the years which might not be covered here. If you come across an odd VIN number make sure to research it thoroughly before buying, you might have stumbled on a rare machine but more than likely someone has changed the VIN after it left the factory which can lead to some legal headaches down the road.